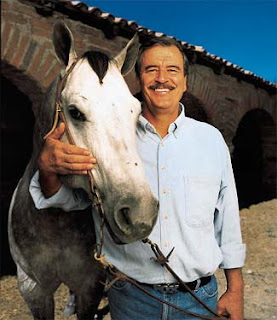 Vincente Fox, ex-president of Mexico, is retired these days. I guess he’s got time to travel.

From KSAT, out of San Antonio:

SAN ANTONIO — During a visit to San Antonio, former Mexican President Vicente Fox said Tuesday he’s concerned about dozens of immigration bills to be discussed at a hearing scheduled for Wednesday at the State Capitol.
He said he’s particularly concerned about House Bill 28, which if passed, would restrict employment and health care benefits for children of immigrants in Texas, including children born on American soil.

“That’s absolutely crazy, unfair, immoral,” Fox said. “Immigrants here in the U.S. contribute strongly to the productivity and the ability of this economy.”

Isn’t it sweet of him to be thoughtful of the American economy? What a prince!!!

I agree with John Lillpop — let’s send our Baby Boomers to be undocumented illegals to Mexico!!! I bet there’s alot of folks who’d donate to buy Jane Fonda across the Rio Grande, where she can protest for the right to have all the Mexican road signs in English!!!