Oh the Irony--Mexico is Having Problems Re-Absorbing It's Citizens 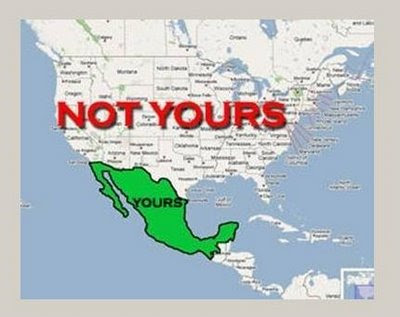 Arizona had an interesting law go into effect January 1, 2008. It's called the Employer Sanctions Law and requires ALL employers to verify ALL employees are United States citizens. In anticipation of this law going into effect, many illegals from the Tucson and Phoenix areas "self-deported" with their families right around Christmas (normally, the illegals would pack up the family and cross back "home" to visit with the family and then come back here). In anticipation of the new law, the border was full with the illegals moving home.

Then, we have several businesses in Phoenix going belly up and declaring bankruptcy. Three reasons--1) the Employer Sanctions Law; 2) the businesses catered to illegals (who are self-deporting) and 3) if the businesses didn't specifically cater to illegals, they hired illegals.

This is also a good thing.

Here's the ironic part...Mexico has issues with the Employer Sanction Law. Mexico is concerned it can't handle the influx of it's own citizens back into their home country.

"Measures like the one approved in Arizona do not contribute to solving the issue of migration by workers between the two countries, and ignore the contributions that migrants make to the U.S. economy and society," Mexico's Foreign Relations Department said.

Well, what can you expect from a country whose main export is its own citizens? It gets better, folks.

Two articles in Arizona papers today (although I first heard this on the 5:30 p.m. news last night while waiting for my daughter's softball game to finish).

The first article was published by the Tucson Citizen, Sheryl Kornman reporting and is titled "Sonoran Officials Slam Sanctions Law In Tucson Visit". The opening paragraphs of this article read:

A delegation of nine state legislators from Sonora was in Tucson on Tuesday to say Arizona's new employer sanctions law will have a devastating effect on the Mexican state.


At a news conference, the legislators said Sonora - Arizona's southern neighbor, made up of mostly small towns - cannot handle the demand for housing, jobs and schools it will face as illegal Mexican workers here return to their hometowns without jobs or money.

"How can they pass a law like this?" asked Mexican Rep. Leticia Amparano Gamez, who represents Nogales.

"Mexico is not prepared for this, for the tremendous problems" it will face as more and more Mexicans working in Arizona and sending money to their families return to hometowns in Sonora without jobs, she said.

and the money quote from this article:

"What do we do with the repatriated?" he asked. "As Mexicans, we are worried. They are Mexicans but they are also people - fathers and mothers and young people with jobs" who won't have work in Sonora."

Sonoran legislators from Mexico's PAN democratic party said their state is not prepared for a mass return of Mexican nationals. They met with Arizona legislators at the State Capitol Wednesday morning. They said they understand the reasons for the employer sanctions law, but said they don't think all the consequences were taken into account.


"We are concerned because probably we won't be able to have all the resources to help in case the amount of people are too many people," said coordinator of the group, Florencio Diaz Armenta. The delegation from Sonora said they cannot quantify how many people have returned to their state from Arizona, so far. But they said, based on anecdotal information, they know there are two groups returning- day laborers and professionals.


Armenta said Mexico does have a plan in place to help those immigrants returning to their country, but he said it is not enough. He said they plan on continuing to engage in open dialogue with Arizona lawmakers in hopes of reaching an agreement. "There is a history of relationship between the states Arizona and Sonora," said Armenta. "We have families on both sides, so we have to worry about what happens on both sides of the border." He said they hope to invite Arizona legislators to meet in Sonora the next time.


The delegation from Sonora also met with LULAC in Tucson.

My take on this? Mexico didn't think Arizona would follow through. Now, Mexico (the country whose main export is its people) has to find a way to solve their own problems with their own people--and they don't like it. They are having to deal with the same problems (on a significantly smaller scale at this point) the United States has had to deal with in absorbing their citizens into our country. They are, quite simply, going to have to find solutions to deal with their citizens. They're going to have to work on their economy, work on their infrastructure, all the things that make a country. They're not going to be able to count on the illegal earnings flowing back to them from the United States. That money flow is drying up.

And it's not just Arizona enforcing the laws. Tulsa, Oklahoma is enforcing as well. From World Net Daily, we see this headline (article postes August 25, 2007): "Mandatory Deportation Has Illegals On The Run" with the subtitle of "State Law Limiting Benefits Looms, and Estimated 25,000 Take to Road". The money quote from this article is here:

"This isn't about whether you are for or against immigration, or for or against immigrants. It doesn't matter what your skin color is or if you speak with an accent. What matters is if you are in the country legally or illegally. The only people threatened by House Bill 1804 are those who choose to break the law," he said.

Expect more whining from Mexico and racist groups such as Aztlan and La Raza. Laws are being enforced, sanctuary cities are rescinding their sanctuary stand (Phoenix for example) and the illegals are peaceably self-deporting.

**This was a production of The Coalition
Against Illegal Immigration (CAII). If you would like to
participate, please go to the above link to learn more. Afterwards,
email brianbonner90-at-gmail-dot-com and let us know at what level you would you would like to participate.