Mexico Is a Foreign Enemy of America! 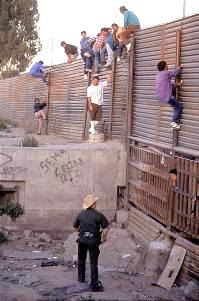 To: President Bush and Members of the U.S. Congress

Each of you has taken an oath to uphold the Constitution, and to
defend America against all enemies, foreign and domestic. Your
authority to govern We the People is contingent on fulfilling that
solemn oath.

You serve at the will of We the People; you have no other claim to power.

The American people intend to hold each of you responsible for meeting the conditions of your oath of office.

Mexico is obviously a foreign nation, and is also a third-world,
socialist nation, which because of corruption, greed, and incompetence,
is unable to feed, educate, and provide minimal health care to its
citizens.

Rather than reforming the political and economic policies that make
Mexico a failure, the elitist socialists that govern Mexico have
decided to “redistribute” America’s wealth to 12-30 million peasants who have invaded America across the border.

The unlawful invasion by Mexican citizens, encouraged by the Mexican
government, results in great harm to America’s homeland security,
economic and cultural stability, and the rule of law.

Again: Mexico is an ENEMY OF THE UNITED STATES.

Immediate action must be taken to protect the American people from
the undeclared war being waged against our interests by Mexico.

The single greatest priority in defending America is to secure the
borders. If that means positioning 100,000 or so troops at the border,
then so be it.

America must defend its borders against foreign invasion, including use of force if necessary.

All such proposals are unacceptable because they would simply encourage even more illegal aliens to invade America.

We must not reward criminal behavior with foolish amnesty programs!

If illegal aliens are uncomfortable about living in the shadows as
second-class citizens,THAT IS NOT THE CONCERN OF THE AMERICAN PEOPLE!

Illegals are here illegally, and should not be made to feel good about themselves—they are criminals!

Illegal aliens have the option—make that obligation— to go back to Mexico.

Please do not underestimate public passion on this issue!

John Lillpop is a recovering liberal.

This was a production of The Coalition Against Illegal Immigration