Ring Ring, illegals at your door

Two
more Iraqis with false Bulgarian passports were detained by Mexican
officials in Monterrey – bringing the total to four this month. The
Bush Administration is promising action on the Southern border between
the US and Mexico and we all look forward to seeing if this actually
comes to fruition. We do not want terrorists to have an easy access
either from the South or North.

Also we do not want the US to become a carbon copy of the UK, where they have people like Dr. Mohammad Naseem, chairman of the Birmingham Central Mosque (supports the killing of homosexuals),
where Imams preach hate in the Mosques, where children are taught to
hate non-Muslims and think that killing them is just fine, and where
Muslims who join the British army also have their lives threatened
because, "it can be seen as wrong for a Muslim man to become a soldier, as they may be asked to do things they do not agree with."

Following questioning, the pair admitted they intended to reach the United States. [snip]

Mexican officials said the are investigating "a network that
could be made up of Mexicans operating in Greece who are selling false
Bulgarian passports for $10,000 to European and Middle Eastern
citizens."

Last year, dozens of Iraqis were discovered attempting to enter Monterrey with phony ID – 17 of them in a single event.

In addition, earlier this month, Norwegian authorities
reported that Iraqis affiliated with al-Qaida and former Baath Party
members may have slipped into Kuwait after obtaining $15,000 Norwegian
passports. Authorities in Kuwait say they are on the lookout for any Iraqi citizen bearing a Norwegian passport.

On Friday the Bush administration officials said that they
will begin to use new technology to create a “virtual” border fence
along sections of the border with Mexico. [snip]

Via The Grey Lady:

Further intensifying the crackdown on illegal immigration,
the administration will unveil new rules in coming weeks requiring all
federal contractors to participate in a system, known as E-Verify, to
confirm the legal immigration status of their workers, Homeland
Security Secretary Michael Chertoff and Attorney General Michael B.
Mukasey said at a joint news conference in Washington.

Next week, civil fines for employers who hire illegal immigrants
will increase by 25 percent, the officials said. Current fines are
$2,200 for a first offense and up to $10,000 for repeat offenses. (continue reading)

Mary Chamberlain, tireless worker against illegal immigration, send
the following email. Lou Dobbs has endorsed Mike Huckabee, so any
intent to have him run for president is news to me. I'm not sure that
he's the man for the job, but I do think it's too late to launch a
candidacy.

It is now or never for Mr. Dobbs to decide if he will throw his hat in the ring for President.

This is the last e-mail you will receive on the Lou Dobbs topic,
unless you are signed up as a volunteer and/or potential contributor at
www.LouDobbsforPresident.org Only those that sign up on the Draft Dobbs site will receive future e-mail alerts on the topic of Lou Dobbs.

Many of you are thinking of not voting or voting for McClintObama or
still working for Ron Paul who has said several times he will not run
as an independent.

For those of you that like Lou Dobbs, Lou needs our help. We have
not told everyone what is happening yet because we have been busy on
many projects, but Lou Dobbs is under fire.

The SPLC, ADL, and National Council of La Raza, along with George
Soros group Media Matters all want Lou Dobbs and Glenn Beck OFF THE
AIR! They are making a serious attempt to curtail free speech in
America and to gag all of talk radio! This threat is real and in
motion.

Showing support for Lou Dobbs helps people see that he is valued regardless of if he decides to do us all a favor and run.

Please help us in the following ways.

1. If you are not signed up at www.loudobbsforpresident.org please do so now.

2. Please use the " Join Us!" feature to contact everyone you can
about the site and ask them to keep the email going to others.

3. Please review all of the information below that we are sending
out today. You can help by sending copies of our press release to all
of the shows you like and any media contacts you can gather. You can
also send copies of our Open Letter To Lou Dobbs to Mr. Dobbs to show
your support.

4. You can write Mr. Dobbs your own e-mail encouraging him to run
and view the Open letter by writing to Loudobbs@cnn.com and
lou.dobbs@cnn.com

Please read these carefully and take action to distribute. Remember, what you don't know can hurt us all and hurt America.

While you're at it, Send The McCain Peso to your politicians, RNC, etc. 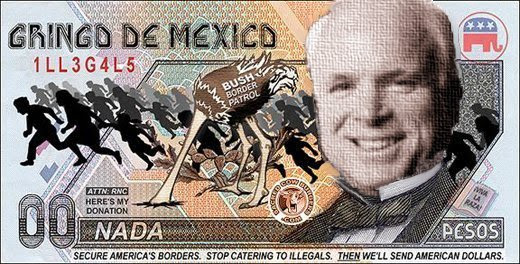 A Tribute To The Minutemen, Islamanazi

How the House Hurt Our Intel Capabilities at Stop the ACLU