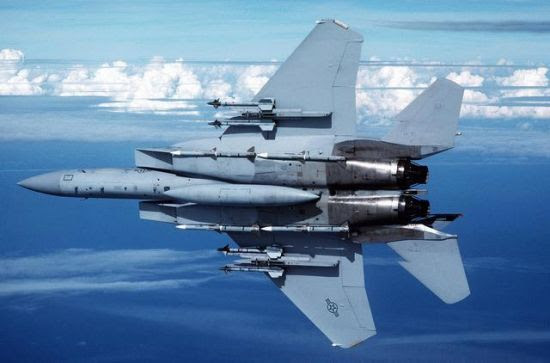 Cracks were found in two F-15 fighter jets based in Japan during checks following the crash of an F-15C in the United States last month, the U.S. military said Thursday.

The cracks were close to the canopies on the two aircraft, which were among 30 F-15s inspected at the Kadena Air base on Japan's southern island of Okinawa, the Air Force said in a statement.

The damage was found during inspections after the U.S. Air Force issued a second flight suspension order for the fighters worldwide following an F-15C crash in Missouri last month in which the pilot was injured. The Air Force lifted the first suspension order on Nov. 21 but grounded planes for the second time later that month after finding additional defects.

The current suspension "will continue until further notice," it said.

The Air Force said the F-15s will not return to operation until further inspections and repairs are completed.

“While I know that a number of you will lose currencies and the ability to maintain the proficiency that the world has come to expect,” wrote Gen. John Corley, himself an F-15 pilot, “I ask that you don't lose your focus.

“Trust that your leadership is keeping a watchful eye and will be poised to execute a plan that will put all of you back in the air as fast as safely possible.”

The prolonged grounding is impacting the training of F-15 pilots who are expected to fly between nine and a dozen times each month. The grounding does not include F-15E Strike Eagles, a two-seat bomber version of the fighter.

The most immediate qualification that pilots stand to lose is the most basic — landing.

While many F-15 pilots were able to log flights during the few days the jets weren’t grounded since the Nov. 3 crash, the 30-day limit approaching fast for all the new pilots.

If a pilot loses his landing qualification, he can still fly the F-15, but he’ll have to make that initial return-to-flight landing with an instructor pilot flying close by, the spokesman said. Wing leaders also have latitude to grant some waivers.

Pilots are also losing that sharp sense of what it’s like to be in fighter cockpit dealing with high-Gs, a cramped cockpit, weather, listening to the radio and keeping a watch for other aircraft. Fighter pilots who don’t fly for as little as two weeks are often expected to fly a basic sortie as their first flight back in the cockpit.

While active-duty F-15s bases are equipped with high-fidelity simulators, the simulators can’t recreate the physical stresses of piloting a high-performance jet. During day-to-day training, the simulators are used for rehearsing missions and practicing emergency and other procedures.

So far, no additional jets have been found with cracks in the suspect longerons that reinforce the front of the jet and support the canopy structure. Inspections of the F-15s turned up eight F-15 with cracked longerons, including the Missouri Air National Guard F-15 that crashed Nov. 3
The Air Force has 676 F-15 aircraft available in it's fleet and on average these planes are 15.5 years old. The oldest models range in age from 24-29 years.

Two of the jets were assigned to the 18th Wing, Kadena Air Base, Japan; one to the 325th Fighter Wing, Tyndall Air Force Base, Fla.; and four to the Oregon Air National Guard’s 173rd Fighter Wing at Kingsley Field.

The Florida and Oregon units are training wings while Kadena is an operational unit.

F-18 fighters aboard the aircraft USS Enterprise have been called in to backfill in Afghanistan after all non-mission critical F-15 flights were temporarily suspended Saturday following the crash of an older model during a routine training session in Missouri last week.

The Air Force has been struggling to free up funds to purchase more advanced aircraft such as the stealth F-22 Raptor, one the most advanced aircraft available, to replace these older planes. Attempts to create funds in recent months involved drawing down forces by 40,000 airmen, an effort that Air Force Secretary Michael Wynn has said "isn't working."

The competition in the air may soon be getting stronger. China has increased its military budget by about 17.8 percent to about $45 billion this year, and Air Force officials here say China is working to match technology of our F-22. Currently the Air Force has only 97 F-22s available for use.

To top all this off, I heard on The Fox News channel last night that Canada will be flying missions over Alaska to protect it from Russian incursions. However, I cannot find this anywhere on the net; so it is unverified.