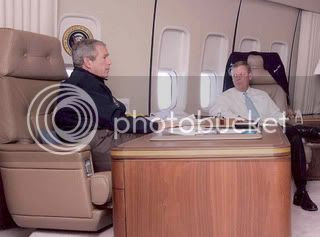 So, yesterday I was able to sneak in on a conference call with Senator Johnny Isakson of Georgia. The purpose of the call was to touch base with some of Isakson's choice constituents. [Apparently, I am not one of them, because I received my invite from someone else.]

Regardless, I am glad I attended, because the comments from all but one person confirmed that Georgian's are 1) Fed up with illegal immigration and 2) Do NOT want the Senate to pass this immigration bill.

The first person, whom i'll call #1, [this was a 'private' call, afterall...] asked Senator Isakson if he thought the minimal improvements on border security were a good trade for the immigration bill.

Isakson responded by saying that the root of the illegal immigration problem is the leak, [more like wide, gaping wound], in the border, and that his ammendments to ensure border security first, before any other new immigration process, was obstructed. This is why he did not support cloture.

#1 went on to ask Isakson if the border security did not approve in the bill, would Isakson support it.

Isakson responded by saying, [...i'm paraphrasing here...], that he has been on the border and without good, credible law enforcement there - America is better off without the bill if it isn't 'whole.'

Then we move on to Caller #2: He says that he does not support the immigration bill, that the border needs to be closed and the existing laws need to be enforced. Only then can America consider working on reforming the guest worker programs.

Isakson said that he's been speaking about the need for a secure border since February 2006, BUT that he needs the support of Congress and the President in order to have the border enforced.

Caller #3 says that the amnesty of 1986 did not work and asks why we need new laws, if the existing law is not enforced?

Isakson says that the 1986 amnesty made a promise of enforcement, but did not have the funding to back it up. Isakson went on to say that the new immigration bill has mandatory appropriation for funding of the new laws. He also said that he insisted on the mandatory funding in this bill.

Caller #4 says the Z-Visa will be devastating for America, and that the illegal immigrants draining our healthcare, public school, and other public systems are harming this country.

Isakson responded by saying the Z-visa is an improved way of identifying illegal immigrants, because the ID's will be biometric. He says that if a biometric ID is put in place, then the document fraud will be put out of business. Isakson also said that in the bill, there are no medical, social security, or welfare benefits for the illegal immigrant, or those with the Z-visa.

Caller #5 Is the only caller that said he trusts Isakson to pass the right bill.

Caller #6 Commented on an unrelated issue, so we'll move straight to caller 7.

Caller #7 Was a member of a law enforcement association and said that he wanted to make it clear that the position of the Sheriff's in the association was the following:

- They were in favor of federal funding or grants for Sheriff's Deputies to ramp-up security on the border.
- That the $100 million in the bill was not enough to do it.

The caller went on to say that law enforcement officers are experiencing, "Hell on the border," and that some deputies are having to escort their families to school and work, because of the threats they are receiving from the Mexican drug cartels. In addition, the methamphetamine coming up from the southern border of Mexico is wreaking havoc on the United States and is a major source of crime in many cities. He also said that funding that helps cities house the illegal immigrants arrested on our soil has been nixed by the President EVERY YEAR, so local agencies are left with the bill.

Isakson commended the law enforcement officers for their work and said that he is leading the fight against methamphetamine, however, he said it was not just an illegal problem, but simply a Meth problem. He agreed that more money is needed for the Sheriff's on the border.

Caller #8 Said that the existing law needed to be enforced and the fence authorized by the government last year needs to be erected as promised. He went on to say that birthwright citizenship needed to be eliminated and the U.S. visit program need to be reformed.

Isakson said that Congressman Nathan Deal [who I love and adore] has championed the cause of eliminating birthwright citizenship and continues to work on it to this day. He has drafted separate legislation to get the Supreme Court to revisit the issue.

Caller #9 Said that it seems there has been no one propisitioning enforcement of illegal hiring, or enforcement of existing law. Critisized the President for being lax on law enforcement.

Isakson responded by saying that most money is put in securing the border; that the cost of hiring Border Patrol Agents and testing unmanned vehicles are taking place instead. Isakson also said that the critisicm of the President is fair.

So, as you can see, Georgian's are voicing their opinions of both the current Administration and the Senate's illegal immigration bill. Now, if we could only get the message to the President.

Yesterday 324 foreign nationals were among the 2,155 inmates at the Cobb County Jail. Cobb County Sheriff Neil Warren says of those, 63 have been labeled as persons of interest to federal immigration authorities.

Police: Drugs may have been factor in Buford shooting

A white, powdery substance was found on 23-year-old Javier Valdivia of Buford. He was shot dead by police when he attempted to carjack a patrol vehicle.

Investigators are waiting to hear from Immigration and Customs Enforcement to verify an United States permanent resident card found on Valdivia-Valdivia at the scene. The card, Moloney said, displayed a different name and identified Valdivia-Valdivia as a 26-year-old Guatemalan.

Danny Collins, 52, Johnny Collins, 55, Quanita Wells, 39, Louis Rogers, 51, and George Rogers, 73, at a home located in a Duluth area known as “The Hill.”
All five remain in the Gwinnett County Jail with no bond.

Hunters Pointe apartments located at 400 Club Parkway and were approached by two black men.One man pointed a silver semi-automatic¬ handgun at the men and demanded money. When the men said they had no money, the armed man demanded money again then fired a shot at the man, hitting him in the stomach. **YOUR TAX DOLLARS AT WORK [for illegal immigration]**

The Hall County schools tax rate for fiscal 2007-08 is lower, but many homeowners, beset with rising property reassessments, will see a jump in taxes.

School officials have said the increase is largely the result of projected growth in enrollment -- an additional 800 students are expected next school year -- and teacher salary increases.

The People's Patrios: Illegal immigration is justification for impeachment

Freedom of Philadelphia: I refuse to bow, how 'bout you?