Dear America: What Will You Do When G.W. Bush Surrenders to Mexico?

Cross posted from Liberalism is Insanity 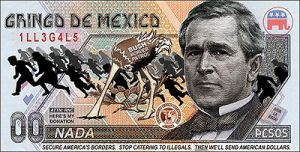 Picture the ugly scene, if you have the heart and or stomach:

A breaking news bulletin interrupts regular broadcasting during prime time. Television cameras zoom in on the White House where a historic piece of legislation is being about to become law by virtue of approval by President G.W. Bush.

At the center of the stage sits President Bush, smiling broadly at the Democrats and RINOs who made amnesty for illegal aliens possible. That would include Democrat senators Reid and Kennedy, and Republicans Frist and McCain. The U.S. House would be represented by Speaker Nancy Pelosi, the Sanchez sisters, and other advocates for illegal aliens.

With a stroke of his presidential pen, G. W. Bush will grant legal status to the 12-20 million illegal alien criminals who have invaded America since 1986, when wholesale amnesty was last granted. Once Bush is finished, former illegal aliens will comprise anywhere from 3-8% of the total United States population.

Nearly all of the “hardworking, goodhearted” illegal aliens that Bush will legalize will vote Democrat for the remainder of their lives, thereby effectively ending the two party system in America.

Mexicans still living in Mexico, but disenchanted with life there, will see the latest amnesty as a sure sign that invading America can be accomplished with impunity. It will be abundantly clear that America’s “conservative” president is adamant in his refusal to enforce U.S. borders and immigration laws.

Thus, scores of millions of additional illegal aliens will head north with little or no concern for U.S. borders and immigration laws.

G.W. Bush will go down in history as the president who actively campaigned for the invasion of America by foreigners from a third-world nation. He will be remembered as the president who discarded American sovereignty, rule of law, language, and culture in exchange for cheap lettuce and fruit.

He will also be remembered as the president who sent American men and women 8,000 miles from home to fight for Iraq and Afghanistan, but who abandoned the American people at our southern border.

Finally, G.W. Bush will be remembered as the president who abandoned the Republican party and consigned it to permanent minority status.

John Lillpop is a recovering liberal, “clean and sober” since 1992 when last he voted for a Democrat. Pray for John: He lives in the San Francisco Bay Area, where people like Nancy Pelosi are considered reasonable!